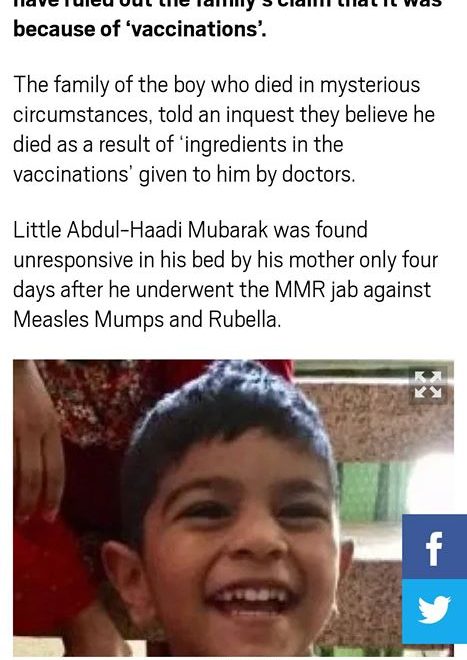 Doctors rule out link between boy’s death and measles vaccination Basit Mahmood Wednesday 17 Apr 2019 1:38 pm Doctors who have investigated the sudden and tragic death of a three-year-old boy have ruled out the family’s claim that it was because of ‘vaccinations’. The family of the boy who died in mysterious circumstances, told an inquest they believe he died as a result of ‘ingredients in the vaccinations’ given to him by doctors. Little Abdul-Haadi Mubarak was found unresponsive in his bed by his mother only four days after he underwent the MMR jab against Measles Mumps and Rubella. The family of three-year-old Abdul-Haadi, who died in mysterious circumstances, have told an inquest they blame a series of vaccinations (Picture: Cavendish Press (Manchester) Ltd) He passed away in hospital an hour later despite efforts to revive him. However a post mortem examination was unable to establish a cause for Abdul-Haadi’s death. Two senior doctors who investigated the tragedy ruled out a link to MMR and other vaccinations. At the inquest in Heywood, Greater Manchester, Miss Nisar, from Oldham relived the moment she found her son dead on October 15 last year. She said: ‘On October 11, he had his MMR vaccination and he was told that after 10 to 12 days, he would probably start feeling unwell and there was a list of symptoms. The inquest heard that the youngster had complained of being tired and sleepy in the hours leading up his death (Picture: David Dixon) ‘But on October 14, towards the evening, he was quite sleepy and wasn’t really himself. ‘I just put it down to being tired because he had a long day. I kept asking him if he was OK and he just responded that he was.’ She added: ‘Then, just before 6:15pm, I arrived home and went into the room and he had his face down. ‘My first reaction was that doesn’t look right, so I lifted him up and moved him on his side. ‘His lips were blue and his eyes and nose were swollen. Stunning photos of pink moon over UK skies ‘I phoned the ambulance and they advised me to do CPR. I couldn’t perform it because I was too hysterical, so my sister did it. Paramedics continued to perform CPR, before taking Abdul-Haadi to the Royal Oldham Hospital, where he later died. The inquest heard Abdul-Haadi had previously suffered from febrile convulsions, which are fits that can happen when a child has a high fever. Abdul-Haadi’s father, Mubarak Haadi told the inquest: ‘We believe that it was the ingredients in the vaccinations that killed him. ‘Too much of anything is not good for you, and there was too much metal in the vaccinations.’ Woman beaten so badly by boyfriend she was ‘unrecognisable’ to family But Dr Melanie Newbould, a paediatric pathologist, said: ‘I don’t think anybody has been able to identify a consistent link between the vaccination and sudden and unexpected death. ‘ Dr Anindyalal Mukherjee, a consultant paediatrician, said: ‘I have never known an MMR vaccine to cause a sudden death in my experience.. If that had been the case, then the relevant officers would have been alerted to this.’ Recording an open conclusion, Area Coroner Catherine McKenna said: ‘Dr Mukherjee and Dr Newbould said that they have never come across a case of MMR vaccination causing a sudden or unexpected death. ‘Dr Mukherjee said that he has seen children with measles die from it, so I record that the vaccination was suitably given. ‘The evidence does not disclose enough information about his death and there is no evidence to suggest a clear link between the MMR vaccine and his death.’ Read more: https://metro.co.uk/2019/04/17/doctors-rule-link-boys-death-measles-vaccination-9235784/?ito=cbshare
Twitter: https://twitter.com/MetroUK | Facebook: https://www.facebook.com/MetroUK/