John talks about his daughter who died just 10 days after having the MMR Vaccine. 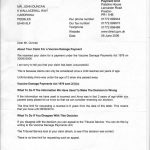 John recently posted this to his Facebook account and give us permission to show it to you here as well:

Some people might be wondering why I take a particular interest in vaccines. Well my daughter died 10 days after being vaccinated with the MMR. She had blood on her lips; evidence of seizure which was ignored by the post-mortem result. It took 8 months before they came up with the notion that the MMR was not to blame and instead it was chicken pox. Chicken Pox DNA concentrations normally diminish and become undetectable within 3 weeks!”

On 3rd June, 2021, a small group representing the UK community of vaccine injured families gathered for a vigil at All Soul’s Church outside BBC HQ in London. This 10 minute film shows Louise Fisher, Read more…

Jasmin’s uncle, Georgie Fisher, died before she was born: International Vaccine Injury Awareness Day is a day of joint support from people around the world for those whose lives have been significantly and adversely affected Read more…